Jim Carrey Jenny McCarthy Have A Nasty Break Up 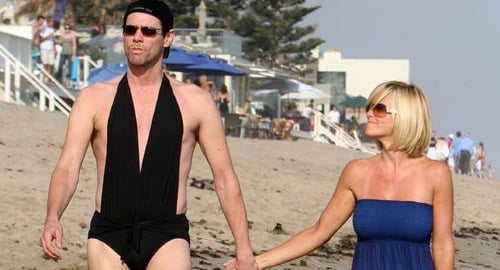 Former comedian Jim Carrey and his girlfriend former sex symbol Jenny McCarthy are in the middle of a heated and very public break up.

Jenny and I have just ended our 5yr relationship. I’m grateful 4 the many blessings we’ve shared and I wish her the very best! S’okay! ?;^>

I think it is pretty obvious from Jim’s tweet that he is saying that Jenny’s autistic son from her earlier marriage has been nothing but a burden on their relationship, and unless she sends him to a home they are finished.

Not one to stand idly by and take the abuse Jim just heaped on her, Jenny fired right back with this mean spirited tweet on her own Twitter account.

I’m so grateful for the years Jim and I had together. I will stay committed to Jane and will always keep Jim as a leading man in my heart.

All I can say is wow I can not believe she went there. If you read between the lines Jenny is saying that Jim is a horrible lover, and that she has been sleeping around behind his back for years. She also appears to make a thinly veiled death threat against Jim’s daughter Jane.

Let us hope both Jim Carrey and Jenny McCarthy take some time to cool off because this break up is getting uncomfortably nasty.